My grandpa passed away peacefully in his sleep the morning of Friday, June 7th, 2019. I’ve been wanting to write about this for some time, but I have been putting it off as doing so is another form of closure and it is hard to let go.

He was 96 years old and had fallen the month prior and broke his hip. The doctor warned us that he was declining and that he didn’t have much time left. The last time I saw him was the Monday night before his passing. He was comfortable and happy laying in his bed. He asked where my dad was and then he asked where I was. He didn’t have his glasses on, so I said that it was me. He leaned forward, recognized me, and then said “Oh, hi!” He held my hand during our visit and when I asked if I could kiss him on the cheek to say goodbye, he said “Of course.” and turned to give me his cheek.

Helping to plan his funeral was a new experience for me. As a genealogist (and probably a lot of nervous energy), I was particularly concerned with the details that would be posted is his obituary and death certificate. I wanted to be certain the records that represented and honored my grandfather would be accurate for the generations to come. The funeral home sent me a draft of the obituary. I’m not sure where or who they received their information from, but there were many mistakes, typos, and inaccuracies. I spent hours and eventually called in my mom for help. Between the two of us, we finally revised the obituary to the final product and I was pleased with the result.

Edmund C. Sheliga, of the Town of Wheatfield, NY, passed away Friday, June 7, 2019, in Elderwood at Wheatfield.  He was born in Buffalo, NY on October 21, 1922, the son of the late Frank and Caroline [Ogrodnik] Szeliga.  Mr. Sheliga served with the US Army during World War II in the Asiatic-Pacific Theater.  He was an instrumentation technician at Bell Aircraft, Sylvania, and Mennen-Greatbatch.

Mr. Sheliga was the husband of the late Ruth [Parkin] Sheliga, who passed away in 2006.  He is survived by three sons Jeffrey (Marcia), Carl (Eileen), Donald (Linda) Sheliga; five grandchildren Jeanette, Brandi, Kristi, Thomas, and Neil; also several nieces and nephews.  Mr. Sheliga was the brother of the late John and Frank Szeliga, and Dorothy (Szeliga) Burkhardt.

Mr. Sheliga was a 50-year member at both the Adams Fire Company in Wheatfield and Delaware Hose Company in Tonawanda.  He was a member of the Wheatfield Seniors and enjoyed woodworking, doing crafts with his wife, playing cards, and spending time with his granddaughter Jeanette.

His family will be present on Friday, June 21st from 4:00 – 8:00pm at the RHONEY FUNERAL HOME, 5893 Hoover Road, SANBORN, NY, where funeral services will be held on Saturday at 9:00am, with the Rev. James R. Bastian officiating.  Members from Adams Fire Company will give a service on Friday at 7:00pm.

* In case you are wondering, my grandpa’s last name was misspelled on his birth certificate and he never had it corrected. His parents and siblings were all SZELIGA and his was SHELIGA. So now my uncles, dad, and I, all have a misspelled last name!

Concerning my grandpa’s obituary and death certificate, one of the details that I debated over was how to spell his parent’s first names. The original drafts from the funeral home listed the names in the Polish version: Franciszek Szeliga and Karolina Ogrodnik. That was how their names were spelled at birth, passenger lists, marriage certificate, etc. but it’s not the names that they went by in America as they had gone by Frank and Caroline. I’ve had this same debate with how I list their names on my trees on Ancestry and FamilySearch. At least with the online trees, you can add alternative names, notes, and also known as options. For his obituary and death certificate, there isn’t really an option for alternative names.

I ended up going with how they spelled their names in America. It matched how Caroline’s headstone was spelled which I assumed that my grandfather picked out back when she passed away in 1968.  There are only a handful of people left that knew his parent’s but they probably would only recognize them by how they used their names here in America. I’m not sure if what I did was genealogically correct, but it felt right.

Everything went well with my grandpa’s service.  I was especially touched by the support that I received from my genealogy friends. Thank you for the cards, texts, newspaper clippings, and attending the calling hours. It meant a lot to me and I’m so appreciative that our shared love for genealogy has brought you into my life.

I gave a eulogy for my grandpa that I will type up and save to his memories and gallery on FamilySearch and Ancestry. That way, I will always have it when I want to look back and remember and future generations will be able to read my thoughts and memories of him. I also plan on uploading the photo slideshow that I made for the calling hours to YouTube.

I loved my grandpa very much. We had a special relationship and I was so fortunate to have him in my life for 41 years.

Contributor: Jeanette Sheliga of Lockport NY is Vice-President of the Niagara County Genealogical Society and Organizer of the North Tonawanda Library Genealogy Club.

215 Niagara Street
Lockport, NY 14094
1-716-433-1033
The Genealogical Society Library is open Thursday - Saturday, 1-4:45 PM except on holidays, when the History Center Building is closed, or we are unable to locate a volunteer librarian. For this reason, we ask that you call ahead to see about dates. 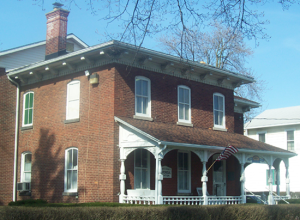